Important: Do not use ToASTER on your production machine! We recommend installation on a dedicated machine, because ToASTER depends on a comprehensive software stack and requires a high amount of system resources.

To briefly introduce the problem domain, we refer to the abstracted system model depicted in Figure 1. The core entity is denoted automation, which represents the logic of a piece of Infrastructure as Code (IaC, see here for a brief overview). An automation consists of multiple automation tasks, which are implemented by some script code and are supposed to cause potential state changes. From the runtime perspective, an automation run represents the entire execution of an automation, which itself consists of multiple task executions. Each task execution effects a set of concrete state transisions which are actually measurable in the system by comparing the pre-state before execution with the post-state after execution. Automations and tasks are configured by parameters which steer the execution of the IaC logic at runtime.

We briefly discuss the implementation of our distributed testing framework. Figure 6 illustrates the architecture from the perspective of a single testing host. A Web user interface guides the test execution. Each host runs a test manager which materializes tests and creates new containers for each test case. State changes within the containers are monitored using strace. 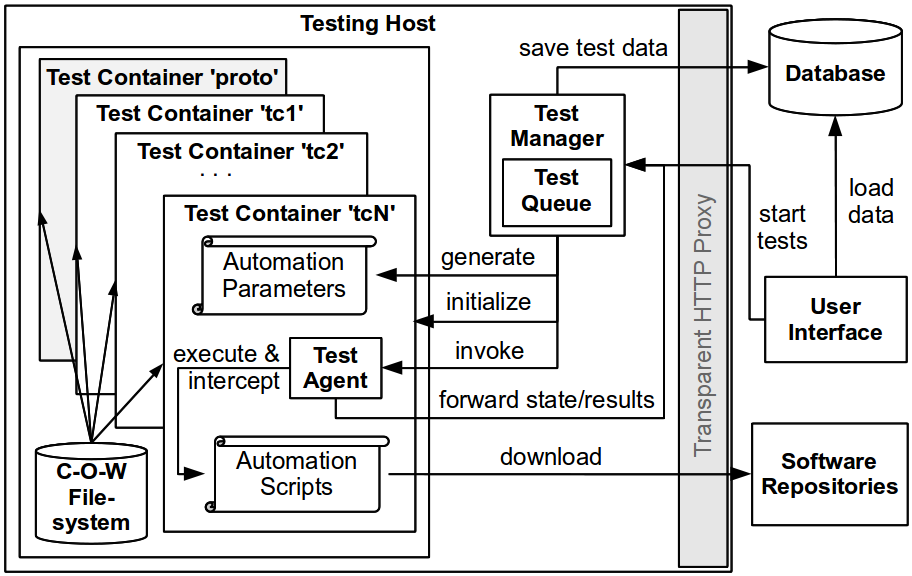 Our framework parallelizes the execution in two dimensions: first, multiple testing hosts are started from a pre-configured VM image; second, each testing host contains several containers executing test cases in parallel. We utilize the highly effcient Linux containers (LXC). Each container has a dedicated root directory within the host's file system. We use the notion of prototype container templates (denoted 'proto' in Figure 2) to provide a clean environment for each test. Each prototype contains a base operating system (Ubuntu 12.04 and Fedora 16 in our case) and basic services such as a secure shell (SSH) daemon. Instead of duplicating the entire filesystem for each container, we use a copy-on-write (C-O-W) filesystem, which allows to spawn new instances within a few seconds. To avoid unnecessary re-downloads of external resources (e.g., software packages), each host is equipped with a Squid proxy server.

We have performed extensive testing of roughly 300 publicly available Chef scripts from the OpsCode community. The results of the evaluation are available here:

ToASTER will soon be provided as a convenient and easy-to-use service. Stay tuned!

« Give us your Chef scripts -
we shall test them for you. »